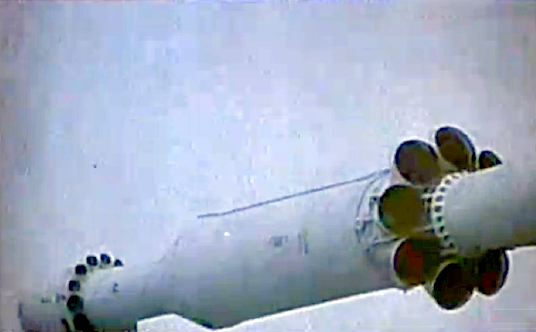 Here’s another, this time of the whole N1-3L launching:

And here’s a stitch of the N1-3L arriving at the launch point, nearly ready to be erected.

WARNING! DO NOT TRUST THE COLOUR IN THIS IMAGE!

I suspect the video was manualy tinted – in fact there was no green anywhere on the N-1, despite many musuem models that have it green. The Soviet Union only used olive paint to camoflage missiles when they were in wooded areas.

Finally, a note on terminology, for those unfamiliar. The booster, (lower part) was the N1. The upper sectioins, including the lander, orbiter, and upper stages was the L3. So the collective term is the N1-L3

Four of these huge rockets were launched, the N1-3L, the N1-5L, N1-6L and N1-7L. At the time the program was cancelled there was an N1-8L, which had been rolled out to the pad, and fuelled up, (so close!), and many others in verious stages of construction, (estimates vary). I am unaware of a single genuine photo of the N1-8L, though parts of it, (and the other later rockets), were broken up and repurposed around Baikonur. It is from these relics that we have information about these later rockets.

Finally, there was the N1M. This was the weight model, a full size mockup used to test pad systems. It changed as the program progressed, but can be identified by the lack of a proper escape system at the tip.