And my starting point was a futuristic apartment set of his. When I bought it, I had no clear idea what I was going to do with it, but I was confident I would find something cool.

The cleanup element that took most work was the bedding, which needed a lot more polygons in subdividing it, and a completely new bump map for the material. Here it is with work pretty much done on fixing up the basic scene.

So, not too bad, but I still have a setting, rather than a finished image. And the image would definitely need a human touch. In my view Daz human figures are rarely completely convincing. The biggest problem is polygon based hair, but skin textures lack detail, and often look fake. As luck would have it, about this time I bought myself some bits and pieces from Ten-24. These are highly detailed scans of real people. But they don’t come with a system for adding clothes, or posing, unlike Daz figures.

My lightbulb moment was when I found a really interesting viewpoint at floor level, and realised that if I used the head on its own, most of the other problems disappeared. A severed head on the floor would just be gruesome, and I wanted to go for creepy, so I hit on the idea of having it in a case which would double as a sort of life support system. Easy enough to model in Lightwave, and I figured the glass dome would do interesting things to the light as well. The head was superbly detailed in geometry, and the age of the face meant I could easily get away without hair. 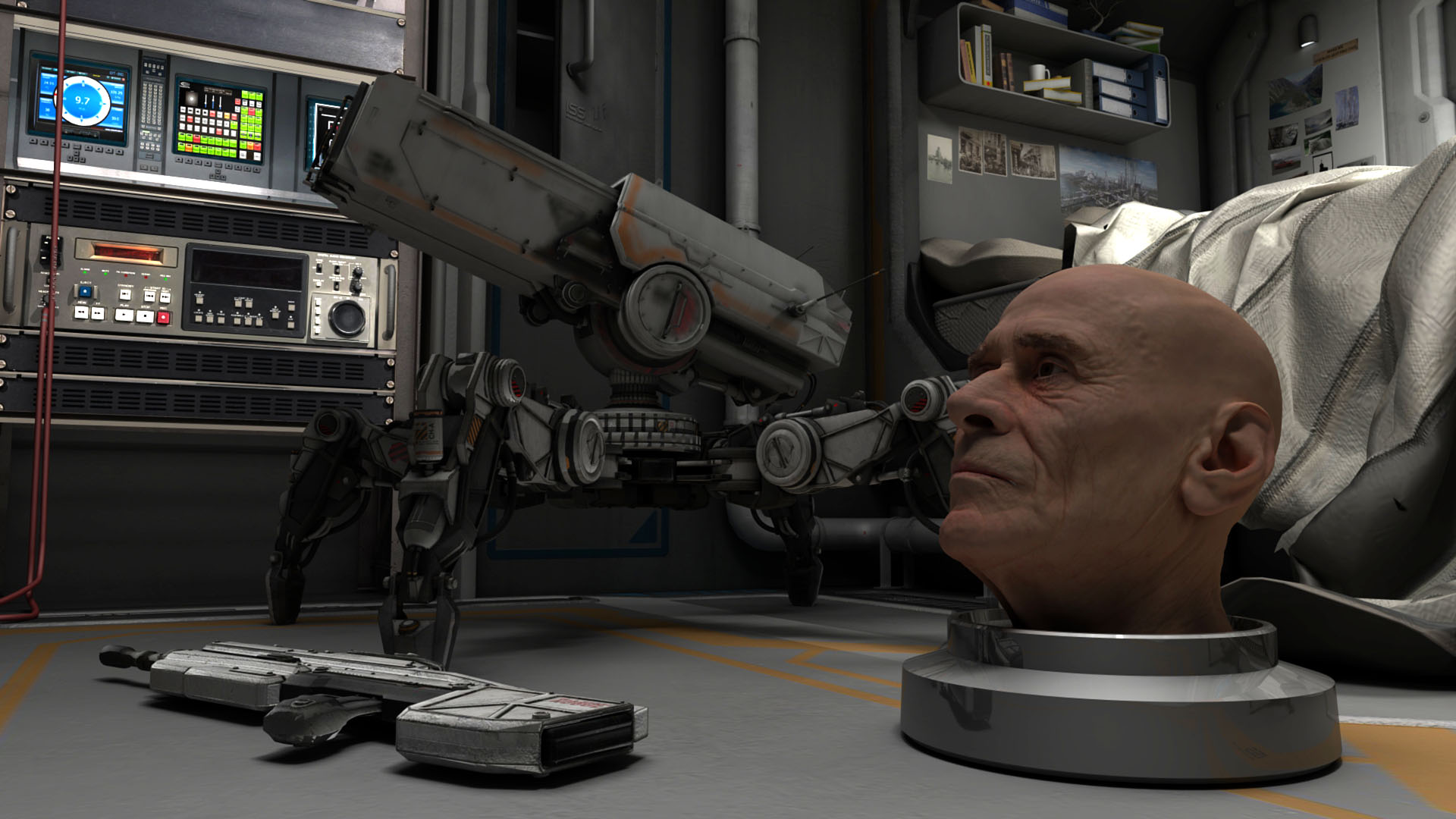 A huge amount of effort went into the lighting, which is not unusual for interior scenes. I have a fairly dim area light over lots of the ceiling, and a brighter smaller one over the small strip light in the ceiling. This has limited range set on, so it’s fainter in the far reaches of the room. There’s another area light for the one over the bed, this is bright and has limited range to reach a bit beyond the range to the bed. Finishing it off is two bounce global illumination, (indirect lighting bouncing around the room, sometimes called radiosity). This last gets some light into shaded areas in a realistic manner, but sends the render time up to about 3 hours for wallpaper resolution.

The final touch, (which I consider really important) was the title. Someone finding themselves as a separated head in their own room seemed like something Philip K Dick would write about, so I found a web site with his quotations, and when I found this one, it really leapt out at me.

One last note – I posted this to the Daz galleries, and was seriously surprised when they used it on their web site, without contacting me. Now I never doubted they would have done it unless they had something tucked away in the T’s and C’s that would let them do it, but even so…

Net result is, I stopped posting my images to Daz galleries.